Why Rearward Facing Is Safer For Your Child

As parents we all want the safest option for our children. Despite Australian Law where parents are legally able to turn their children's car seat to forward facing at six months,  we at Maxi-Cosi recommend keeping your child rearward facing up to 30 months (or as close to that as possible) as there are studies that show that it is far safer to keep them rear facing for longer.

Why facing backwards is better

In an accident, a rear-facing car seat reduces impact on a baby’s vulnerable head and neck. That’s why it’s safer to keep using a rear facing seat – even when your child outgrows his baby car seat.

The first baby car seats were little forward-facing chairs that hung from the back seat on hooks. Maxi-Cosi introduced the very first rear facing baby car seat in Europe in 1984. The benefits of rearward-facing travel were known even earlier in Sweden. This was due to the pioneering work of Professor Bertil Aldman, who, in the early 1960s, noticed that astronauts on the Gemini space mission faced the opposite direction of travel.

The spacecraft’s chairs and positioning were designed to spread the substantial forces over the astronauts’ whole backs. Professor Aldmann saw that the same principle could be applied to develop the first rear facing safety car seat for toddlers.

So why is rear facing travel safer for babies and toddlers?

You’ll notice that your baby’s head is proportionally much larger and heavier than the rest of his body. The bones and muscles in his neck have not yet developed enough to support his relatively heavy head.

If your baby travels in a forward-facing car seat and you have a frontal collision, his head can be thrown forwards. This puts stress on his head and neck, potentially causing serious injury.

But a rear facing car seat protects your child’s head and neck by spreading the forces over the whole back – just like the astronauts. In recent years, we introduced an A4 type convertible car seat, through Australian Standards. This says that babies and toddlers must travel in rear facing car seats until they are at least 30 months old. By then their neck bones and muscles are more developed. 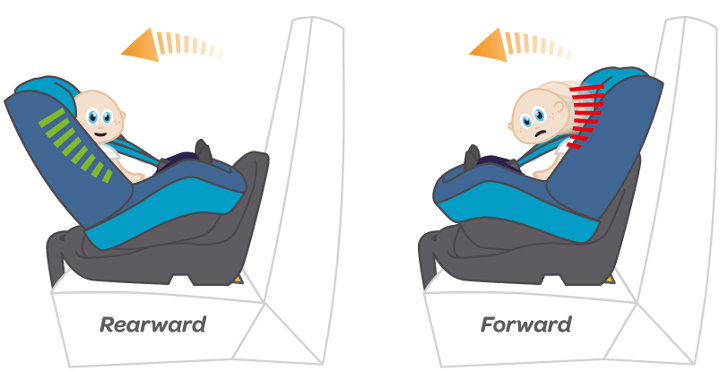 Although the biggest safety gains have been made by extending the period of rear facing travel to 30 months, it’s actually safest for children to travel in a rear facing car seat until they are 4 years old.

What if we have a rear impact accident?

Research shows that most road accidents (around 70%) are frontal collisions. Also, the impact of a rear collision tends to be less as vehicles are colliding in the same direction, rather than head-on. Severe rear collisions are rare.

This is a day you will never forget – taking your new baby home for the first time. The shock of leaving the hospital unsupervised... as parents... with YOUR baby. You’ll be full of plans and looking forward to introducing the latest member of your family to everyone.

A few golden rules will help ensure your baby’s first trip in the car goes as smoothly as possible so everyone arrives safe and sound and ready to enjoy the celebrations.

Why Choose Maxi-Cosi and Quinny Brands?

We know that the market is crowded for children's products, and it can be a mind-whirling ordeal to sieve out the good from the not, the comfortable ones from the rest. And, even after segregating these, there's so many offerings out there. So, why, Maxi-Cosi & Quinny, when there's a cot-load more?

Getting ready to welcome Baby home can be overwhelming and most new parents frenzy over what to prepare, what to buy and what to buy first.

As a new parent, sleep is the part of your life that will be most affected. Every parent will swear that a happy baby is one who sleeps enough and has quality sleep.  Baby will grow up healthy and fuss-free too.  And when baby sleeps well, the parents sleep well too !